Natural England work with the RSPB, Butterfly Conservation and landowners is helping to return the marsh fritillary butterfly to Oxfordshire

The marsh fritillary butterfly (Euphydryas aurinia) is thought to have become extinct in Oxfordshire around 1996. Now Natural England’s Thames area team, Butterfly Conservation, the RSPB, the Ministry of Defence (MoD) and a local landowner are working in partnership on a long-term project which could see the return of the rare and beautiful butterfly to its last known location in Oxfordshire.

Once widespread, the marsh fritillary’s population declined severely during the 20th century as a result of habitat loss and fragmentation.  In Britain, it is now restricted to parts of southern England and Wales, the west coast of Scotland and a few sites in Ireland. As the situation for the butterfly in mainland Europe is even worse, the species is of high conservation concern and the subject of several conservation projects.

Three years ago, Natural England, RSPB, MoD and Butterfly Conservation discussed the possibility of re-introducing the butterfly to its last known site in Oxfordshire - the damp grassland fields at Otmoor, northeast of Oxford.

Step one was to improve the habitat for the species. Marsh fritillary caterpillars need an abundant supply of the foodplant devil’s-bit scabious (Succisa pratensis).  The butterfly lays large numbers of eggs on the underside of devil’s-bit scabious leaves, where they hatch into caterpillars. Caterpillars can eat their way through an entire plant in a day, so plentiful supplies are needed at several locations in close proximity! Tussock-forming grasses, rushes or sedges are used by groups of caterpillars to over-winter in ‘tents’ of dense silken threads.

Swathes of devil’s-bit scabious can be found at the MoD’s rifle-range in Otmoor SSSI, but the site is mown frequently, making it unsuitable for caterpillars. Following advice from Butterfly Conservation and Natural England butterfly experts, the RSPB and Natural England decided to boost the population of devil’s-bit scabious at the adjacent RSPB Otmoor Reserve, and in the grassland fields at a private estate, within Otmoor SSSI.  A new Countryside Stewardship Higher Tier agri-environment agreement set up for the estate secured grants to cover the cost of growing the devil’s-bit scabious plants. 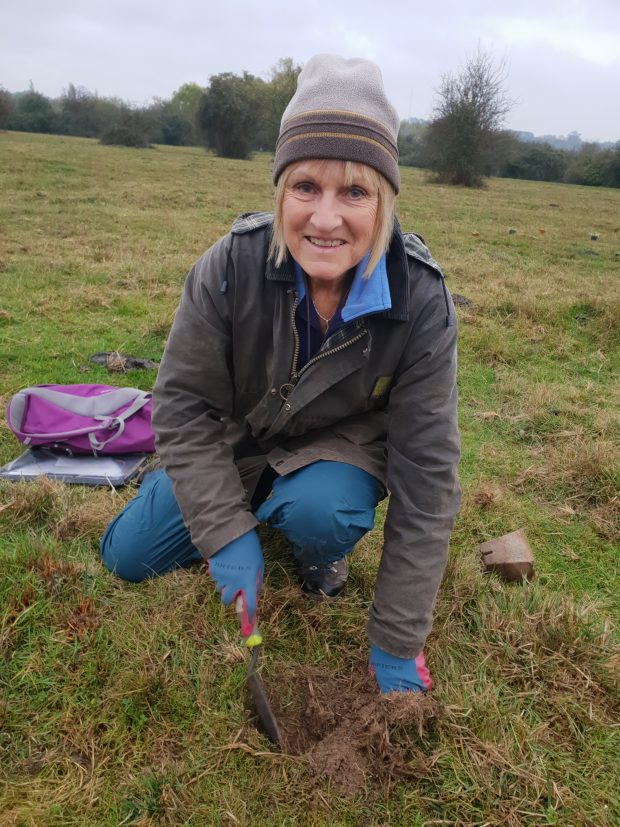 Bridewell Organic Gardens, a mental health charity offering social and therapeutic horticulture near Eynsham in Oxfordshire, was contracted to provide 500 devil’s-bit scabious plants, using half the seed collected. The rest were grown by Alison herself.

Seed sown in seed trays was left outside over the icy cold winter, to allow the seed to ‘stratify’ in order to germinate. We held our breath until the weather warmed up in the spring when... devil’s-bit scabious seedlings started to appear! These were potted up by Natural England and Environment Agency colleagues in July. Trays of plants were divvied out to ‘devil’s-bit scabious adopters’ to look after over summer, with two simple instructions - keep them well watered, and keep the slugs and snails away! 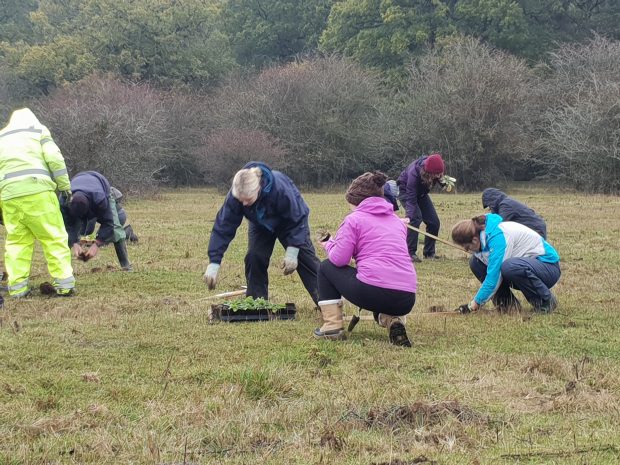 The adopters did a fine job. Between them and those grown by Bridewell Organic Gardens we had around 1100 plants to plant out on the ridges of a ridge and furrow field at the estate in Otmoor SSSI. A daunting task! An amazing 34 people including RSPB, Butterfly Conservation, Oxford Conservation Volunteers and Natural England staff turned up for the first session in November, planting 600 plants by lunchtime! The Oxford Conservation Volunteers planted the remaining 500.

We plan to grow and plant a further 1000 devil’s-bit scabious plants at the estate next year. These will boost similar quantities planted by RSPB volunteers at the RSPB Otmoor Reserve over the last two years. If the plants survive, our efforts should eventually result in the return of the marsh fritillary to Oxfordshire.