The role of new development

Biodiversity plays an important role within our towns and cities as it helps to improve air quality, provides resilience to climate change, adds amenity value and supports wellbeing. Despite this, biodiversity continues to decrease at an alarming rate. New development can help to reverse this trend, by providing the opportunity to incorporate green infrastructure and enhance biodiversity.

In 2016, Berkeley Group became the first developer to set an ambitious commitment to develop an approach to ensure that all new developments create a net biodiversity gain. Through this commitment, we aim for all their developments to make a positive impact on their local environment by creating an overall enhancement for biodiversity. Put simply, there should be more nature afterwards than before development began.

Underpinning Berkeley’s approach is the Berkeley Group Biodiversity Toolkit, which enables project teams to calculate, enhance and manage the biodiversity on every new site. The toolkit comprises a project management section, which enables teams to monitor and manage biodiversity throughout the project, and calculators which enable teams to baseline habitats on site and determine how a net gain can be created. It is used from the initial design stages to ensure that the right habitats are being retained and created.

The calculator within the toolkit is based on the metrics developed for Defra’s Biodiversity Offsetting trials. This process encourages Berkeley to follow the mitigation hierarchy to retain the most valued habitats on site and then create new habitats which provide the greatest biodiversity benefit whilst also offering amenity benefits.

The toolkit is now used by Berkeley’s project teams and their appointed ecologists on every new site, and helps teams manage and monitor the biodiversity requirements during the development process.

Taking a holistic approach is key to designing and delivering biodiverse places. To help project teams consider concepts such as connectivity, links to the community, and local ecological character and distinctiveness, Berkeley Group worked with The Ecology Consultancy to develop a set of nine overarching design principles that can be applied to help deliver a net gain for biodiversity. These are contained within a guide called The Nine Concepts: Making Space for Nature and Beauty, along with examples of how they can be applied in practice. 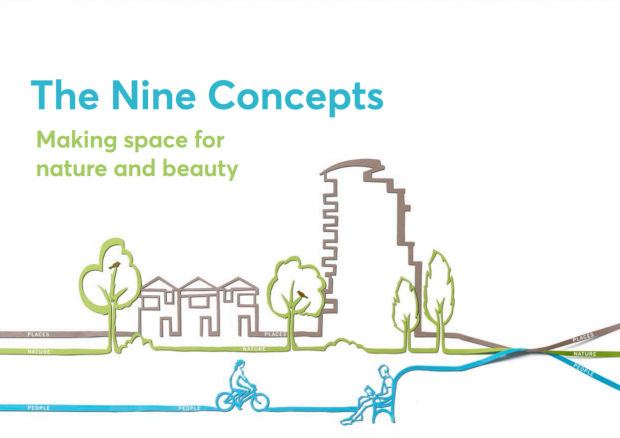 As sites that have been designed to achieve a net biodiversity gain move into construction, Berkeley Group is developing an approach to verify that the net gain is achieved. At the same time, the commitment has prompted some existing developments to revisit their planting and landscaping. For example, at Kidbrooke Village, Berkeley East Thames have partnered with the London Wildlife Trust to enhance biodiversity by transforming the parkland, delivered as part of the early phases of the project, into a wetland area that will attract wildlife and people. The London Wildlife Trust baselined the site using the toolkit and created a new landscape strategy that would ensure a net gain for the site.

Defra is currently running a consultation on its proposals to make biodiversity net gain necessary for developments when granting planning permission. To give your views, visit www.gov.uk/government/consultations/biodiversity-net-gain-updating-planning-requirements.