For a very long time, casual observers of the worlds of conservation and farming would have been forgiven for concluding that despite being in the same landscapes, these were two separate worlds. The domain of one was Nature Reserves, the other intensively farmed fields where only crops lived.

Indeed, for many decades, conservation and farming appeared to be locked into an irreconcilable conflict, one that was reinforced and rendered all the more intractable by farm policies that largely excluded the rising questions of climate change and Nature decline.

During the last few years, however, things have suddenly changed. This has in large part been through a growing realisation that farming and food security on the one hand, and a healthy and diverse natural environment on the other, are in fact mutually interdependent. Without stable and functioning natural systems, farming is less secure, and if we are to halt the loss of wildlife while ensuring nutrition for an expanding population then agriculture needs to regenerate the systems that sustain it, including soils, pollinators and climatic stability. 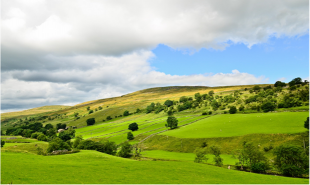 Moving from a position where farming and Nature were seen as separate to one where they are pursued together of course requires changes to how we do things, including the policies that support and incentivise behaviour in the landscapes where food is produced. On that subject, this week’s announcement from Government about the shift towards a fairer, more sustainable farming system was a very significant milestone.

While a decade ago this might well have been met with considerable opposition from landowners and land managers, keen to maintain their established practices and worried about what it might mean for their income, this was happily not the case, underlining the progress that has recently been made and the opportunities for the future.

Concerns that have been expressed have tended to focus on the need for more detail in the Agricultural Transition Plan, and that is now one of the main tasks at hand; to paint a more detailed picture of the future based on pilots that will demonstrate what works, and to identify what needs more refinement, before making a full transition to a post-EU farming policy by 2027.

I know from meeting farmers, and seeing the great conservation work they do, that many are passionate about caring for our natural world and leaving it in a better state for the next generation. That hasn’t always been possible in the past because of the expectation placed on farmers to increase production significantly, often at the expense of Nature. The declines in habitat and species over the past 70 years bear witness to that.

The main shift is to move from payments based on the area of farmland that is being managed to payments of public money for public goods. As the Farming is changing leaflet makes clear, by rewarding farmers for providing public goods the nation will be making sound, long-term investments in:

All this underlines the broad new recognition that Nature is not a barrier to progress, but a prerequisite. Crops and livestock, like us, are firmly rooted in Nature and can only thrive if Nature does too. This is brought home all the more by the effects of the climate emergency and declining biodiversity. These effects in turn offer vivid reminders that what we have done to date is not enough and is why at the heart of the Government’s 25 Year Environment Plan is the broad goal of leaving our environment in a better state than we found it.

With more than two thirds of England’s land managed for agriculture, the scale of the benefits is potentially huge if we can get this right. And the ATP sets out a range of measures to support this shift including the Farm Investment Fund to support sustainable productivity.

We have the opportunity to transform the way the countryside looks and sounds, with more trees, hedgerows, ponds, wetlands and birdsong. More bees and butterflies and more wildflowers. And more opportunities for people to enjoy all these wonders, while at the same time locking up a lot of carbon.

The new farming policy will make a huge contribution to the creation of the Nature Recovery Network that is set out in 25 Year Environment Plan. Natural England launched with partners the delivery phase of this last month and are aiming to bring thriving Nature to every part of the country, linking up our best wildlife sites as well as towns and villages. We expect this new policy to be the biggest single thing that will enable it to happen.

And one vitally important other aspect of this investment via land managers is how it reaps greater dividends for society. Less money is spent cleaning the public water supply, tackling poor health, meeting our net zero ambitions, dealing with flooding and drought and adapting to climate change.

Natural England has the relationships with land managers and the scientific expertise to help them bring about this revolution. We have also helped the government as it shapes the future of farming beyond the EU’s Common Agriculture Policy.

The next year will see us working with land managers and farmers to pilot this new approach. I am personally looking forward to meeting with many of those participating in this important pilot phase, and to learning as much as we can from them. Our aim, using that learning, is to ensure by the time of the full adoption of the new scheme in 2027 we will be supporting many farmers and land managers in producing sustainable food while at the same time taking us on the our national journey to the low carbon and high wildlife outcomes that are at the heart of Government policy.