District level licensing (DLL) for great crested newts is about using our regulatory powers to bring about improved conservation outcomes for our largest native newt. What’s more, the approach can also help meet our ambitions to build back greener.

Under the traditional approach to licensing disturbance of great crested newts, developers who want to build on land where they are found must trap and relocate the species before starting work, simply keeping them out rather than helping to conserve their populations. The amount of money spent on survey, trapping and exclusion with plastic fencing can outstrip that spent on habitat creation and management by a ratio of seven to one. Seasonal restrictions can also lead to delays and create uncertainty over the costs and scheduling of planned development. A lot of money is spent without there really being anything in it for the newts. 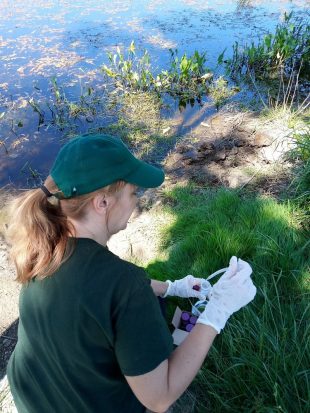 DLL offers an alternative approach to licensing whereby more habitat is created than lost to development (at a ratio of four to one). Developers must pay for this new habitat based on the predicted impact of their development which covers the creation or restoration of ponds in areas modelled to make ‘more, bigger, better, more joined up’ great crested newt populations. New habitat is delivered by conservation bodies, like the Wildlife Trusts, and maintained and monitored for 25 years – all funded by the initial payment.

DLL is built upon a sound evidence base incorporating 7,518 new pond surveys and tens of thousands of existing records for the species. The approach utilises award-winning scientific modelling techniques to predict where great crested newts are, and where creating and restoring ponds will help support existing and connect local populations.

Under Natural England-led DLL schemes, 85 percent of developer money goes directly towards habitat creation/restoration, management and monitoring, compared to approximately 16 percent under traditional mitigation licensing.  Costs of DLL are slightly higher than for orthodox licences, but developers are willing to pay them due the greater flexibility offered by the scheme; so more money from the scheme and far more of it spent on actual conservation measures.   Last year Natural England and our habitat delivery partners (Wildlife Trusts for example) created/restored 386 ponds. We’re aiming for more than 500 ponds this year.

Great crested newts are moving in – Natural England’s first year monitoring results have shown 34 percent of ponds created or restored for DLL have been colonised, well above the modelled colonisation rates. These are early, and very encouraging results, and we’re looking forward to continuing our monitoring programme and seeing what next summer brings.

New ponds created or restored for great crested newts through DLL schemes can also provide wider biodiversity benefits. For example pond restoration has been shown to expose seeds that have lain dormant in old ponds, helping rare wetland plants to ‘come back to life’. In July this year, a team from University College London (UCL) Department of Geography surveyed a pond restored as part of the Norfolk DLL scheme and the Norfolk Ponds Project (NPP). Six plants of an annual flowering species known as grass-poly Lythrum hyssopifolia were recorded – the first confirmed record in the county in over 100 years. 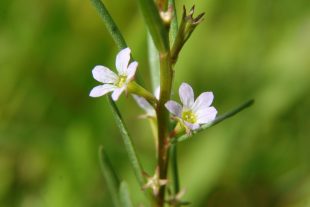 And finally – in our round up of DLL by numbers - we are celebrating 100! This week we reached a significant milestone for the rollout of DLL. With the launch of the Natural England-led scheme across Leicestershire, Rutland, Rushcliffe and South Kesteven (see the tweet), this innovative, strategic approach to licensing is now available and being used by developers across 103 local authorities.