Using data from our Monitor of Engagement with the Natural Environment Survey (MENE) and Exeter University’s study, new research published in Nature has found that two hours of nature a week significantly boosts health and wellbeing.

This supports findings from our 2017/18 MENE surveys which found that health and exercise is now the most frequently reported reason for people visiting the natural environment, which has risen over the years from 34% of all visits in 2009/10 to 50% in 2017/18.

It is fantastic to see Natural England data being used to generate findings like this which improve our understanding of how nature can benefit people and it is very rewarding to see the value that others place on our work.

Findings from the study found that people who spend at least 120 minutes in nature a week are significantly more likely to report good health and higher psychological wellbeing than those who don’t visit nature at all during an average week. The study highlights that it doesn’t matter whether the 120 minutes was achieved in a single visit or over several shorter visits, and is not limited by gender, age, occupation, ethnicity, socioeconomic background or those with long-term illnesses or disabilities.

Findings that physical exercise or just sitting on a bench outdoors, and the fact that getting out in nature is good for just about everybody, has helped us to inform the development of our work such as our Green Infrastructure standards, which will enable more people to use and benefit from their local greenspaces. 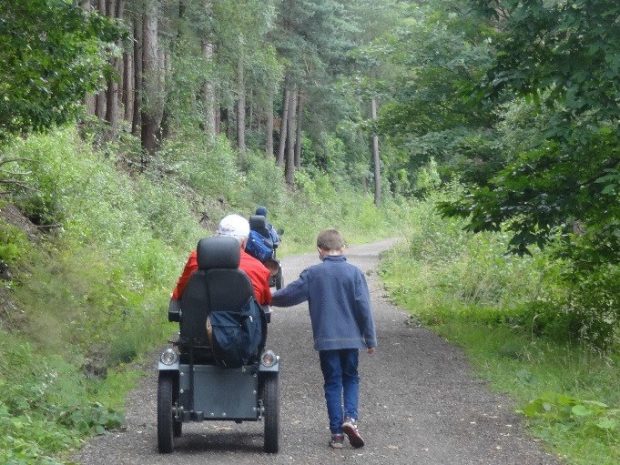 Dr Mat White from the University of Exeter Medical School, who led the study says:

MENE is probably the world’s best, and largest, study collecting data on people’s weekly contact with the natural world. Many researchers in other countries have said to me they wish similar surveys were run in their own countries.

It’s well known that getting outdoors in nature can be good for people’s health and wellbeing but until now we’ve not been able to say how much is enough. The majority of nature visits in this research took place within just 2 miles of home so even visiting local urban greenspaces seems to be a good thing and 2 hours a week is hopefully a realistic target for many people, especially given that it can be spread over an entire week.

The findings from this study are adding to the growing body of evidence which shows that being outside in nature is good for people’s health and wellbeing. This evidence is really valuable to help us work with partners and other government bodies and agencies, including health professionals, in making decisions about how to help people improve their quality of life, and help us and others make the case for greater investment in the natural environment.