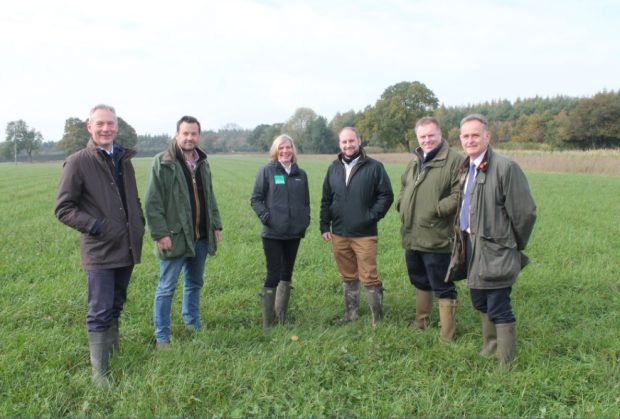 This week I visited two farms in Oxfordshire with the National Farmers Union (NFU) and our Head of Agriculture Geoff Sansome to see first-hand how farmers are practically delivering for the environment while running successful food-producing businesses.

Alongside the NFU’s Terry Jones, Andrew Clark and William White, we first visited Mays Farm, where David Passmore runs a traditional beef and arable farm. We then met Ed Allen, who manages a large scale arable and pig operation at North Stoke Farm and takes part in a variety of Government-run environmental schemes.

One of the main things I took away from the visit was that in many respects, Natural England and the NFU are united in the same goal – and that’s ensuring funding and advice from government enables farmers to produce the many public goods we all rely on. This include enhancing biodiversity, providing opportunities for people to enjoy the countryside, or making a real contribution to tackling climate change.

This is more important than ever with public concern for nature at an all-time high, and the impacts of climate change starting to become apparent. Both Government and the NFU have ambitious targets to reach net-zero and working with farmers to tackle environmental degradation, while boosting productivity and being more efficient with inputs is a hugely important part of this.

Importantly, the farmers we visited showed how producing food and delivering public goods can go hand in hand. That includes through the use of break crops, planted in between arable crop harvests, which we know can improve soil health and help lock in soil carbon.

On David Passmore’s mixed farm the rotational grass leys were being grazed by sheep and cows, while on Ed Allan’s arable enterprise he had a two year sown legume sward. Both these methods help the farmers to control the blackgrass on their farms and boost arable yields after the break crop, but also provides real and visible benefits for nature. Both the farmers have seen increased populations of skylarks and flowers for pollinators, while people using the public footpaths nearby had seen a flush of poppies and clover in the summer.

It was also interesting to see how this work not only benefits the environment, but is good for business too. High-tech crop yield mapping technology was being used by Ed Allan to identify the lower yielding areas on his farm. He chose these places on the farm for his Countryside Stewardship options such as cultivated headlands, while the higher yielding areas were identified for growing crops, increasing the efficiency and productivity of the farm.

The visit was an important moment to reflect on the future environmental schemes we will introduce to replace the system farmers currently subscribe to under the Common Agricultural Policy.

We have talked before about how putting farmers more in control of their agreements can deliver for nature, and the farmers we visited were able to clearly identify the contributions agri-environment schemes could make to their business models. Profitable farming and enhancing the environment do not have to operate in isolation.

Ed and David also spoke about their hopes for future schemes to be flexible and open to allow farmers to use their judgement and respond to local conditions year by year, if for instance there was extreme weather. We heard that an outcome-based scheme would be welcomed, but this must not be too complicated and challenging to act as a barrier to entry.

Both NFU and Natural England want as many farmers and possible to be able to produce healthy food while helping our landscapes, rivers and wildlife to flourish. This will be crucial in our commitment to net zero emissions and I look forward to continuing to work with Terry, Andrew, William and the wider team as we each play our different roles to deliver a bright future for farming.